Gantt Charts and Its Advantages in Projects

Given the Gantt chart’s long-standing history as a powerful analytical tool, no project management glossary is complete without its inclusion. It was first conceived by Polish engineer-cum-economist Karol Adameicki, who called it the harmonogram. Owing to the language barrier (Harmonogram was written in Polish), it was largely unknown.

It was American engineer Henry Gantt’s version of the activity schedule that eventually took off, inspiring an entire range of software suites with the Gantt chart component embedded.

Gantt charts have been in existence for hundreds of years and has served several thousands of projects. There’s a simple reason for its popularity; it visually depicts time-sensitive tasks, activities and events in order to get the project delivered in the shortest duration possible.

Planning subsequent project phases requires unconditional visibility into the project calendar and resource schedules. So where does the Gantt chart fit in all of this?

The answer to this question starts with an understanding of the Gantt chart’s layout. It comprises of a task list with a horizontal bar that can slide forward or back to capture durations for each task. It eases a project manager’s workload by representing progress made against the resource(s) assigned specifically to execute and complete it.

Let’s look at some of the benefits of using Gantt charts in your projects. 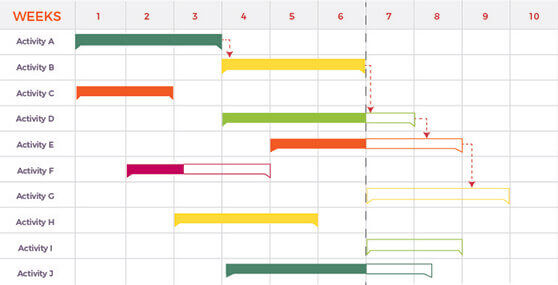 Originally, Gantt charts were drafted on paper and had to be redone several times over to reflect updated timelines. The web-version of the chart not only simplifies the editing process but digitizes volumes of project-centric information. It helps save time and effort which would otherwise be spent revising and rectifying project schedules.

Ideally, the time, costs and efforts invested into a particular task should stick as closely as possible to the original estimates.

That being said, interdependencies along the project’s critical path are inevitable and govern the earliest start and latest dates by which the project can be delivered.

Gantt charts are used for documenting a project’s interlinked activities, dependencies and scheduled duration. It also allows for adjustments in the following events;

Gantt chants let resource managers determine how resources can be shared optimally across multiple inflight projects. The challenge is to staff the project without stretching workloads thinly.

This way, projects starved of resources can be mobilized without disrupting the sequential flow to tasks. After all, when it comes to interlinked projects, it’s only a matter of time before tasks overlap, requiring fewer or additional resources.

Therefore, the more you see, the better able you are to rearrange and accommodate in-tray tasks into the schedule.

Gantt charts incorporate resource timesheets against tasks which individual staff have been allocated. This way, project teams are informed of each others’ efforts with a rundown of pending tasks, running or completed.

This is further broken down to provide information on those tasks with extended timelines as well as tasks that have been finished on time or ahead of schedule.

This way, the team’s availability, competencies and utilization rates all add up to ensure no single staff is over or underutilised during the course of the project.

Moreover, it prevents unnecessary rework with mission-critical work being assigned only to specialists. No task would risk overlapping or delaying succeeding work. It matches the existing resources and their capabilities such that their competencies are optimally utilized.

A striking advantage of using a gantt chart is that it lets you measure the project’s progress and performance based on the number of milestones reached. It also measures whether the milestones were achieved before, after or within the proposed date.

Conversely, it also lets you uncover the root cause behind delayed or unachieved milestones to prevent repeat occurrences in future such similar projects.

With a list of project milestones in hand, you can even make a note of the skills sets which helped in the overall task execution strategy. This makes it easier to plan for future projects, while incentivizing performances and retain highly qualified resources for the long run.

A Gantt chart is used for tracking project schedules, thus ensuring high-priority and mission-critical tasks aren’t sidetracked. Your teams can then focus and collaborate to get the task completed. This stems from the fact that it lists tasks by their time-sensitivity and criticality to let project managers create a priority log objectively.

Simply put, only when you see all scheduled tasks will you know if you’ve accounted for the project’s constraints in their entirety.

With real-time scheduling data, you prevent the risk of leaving lengthy and complex task for the last. More importantly, should your resource pool’s schedule be compromised owing to mitigating circumstances and/or market uncertainties, you can re-assess availability of secondary staff and release them into the project to prevent productivity lapses.

Gantt charts also allow you to record adjusted timelines in accordance with a task finishing earlier or later than estimated.

For example, if a certain tasks’ efforts are estimated to take 5 days but finishes in 3 days instead, the next activity can be pushed up the queue to be worked on an earlier start date.

An optimally utilized workforce is your firm’s biggest asset, more so when the right people are assigned the right projects. The benefit of Gantt charts here is that they not only display a list of resource profiles by their quantity, location, relevant experience, capabilities and competencies but also point you to which tasks they’re on, thereby preventing scheduling conflicts ahead of the curve.

With a resource utilization heatmap, you’ll retrieve instant insights on billable utilization, which lets you improvise future schedules created on a Gantt chart. Resources are then shared or re-deployed based on their availability and ability to complete tasks efficiently.

Now that you know the advantages of using a Gantt chart, let’s head to the next section to get the basics of using one down. 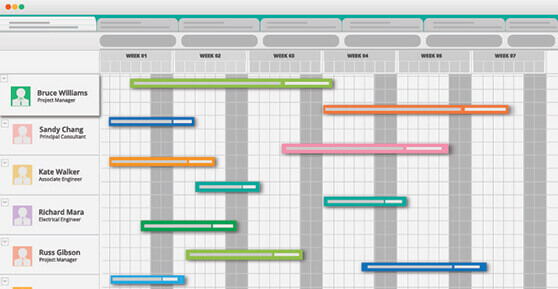 How to use a Gantt Chart

The first actionable step before migrating to a Gantt chart module is to create a project plan.

This is to list all possible and known tasks in each of the 5 project phases. The following steps build up your project plan as you go along –

The work breakdown decomposes project activities to a number of smaller components. This way, you’ll know what needs doing and by when. You’ll also know the quantity and quality of resources(human and technical) needed.

Document all known activities in order to determine which ones are mutually exclusive or interlinked. This way, you’ll estimate the timeframe of the activity schedule, and determine tasks which overlap or remain independent of preceding activities in the chain.

3. Refer to a global resource inventory

A list of all available resources lets you tap into potential from within, such that tasks can be assigned only to employees at the right location who possess the relevant know-how and competencies.

Compile when activities start and end in a sequence so that schedules are organized to minimize conflicts.

The Gantt chart has interested experienced and newly qualified project professionals alike. Given that the right resources prevent cost overruns and delays, playing around with a Gantt chart template gives you a fair idea of how resource and project schedules to stick to the plan.

Armed with a comprehensive overview of its applications and benefits in project management, it’s time to watch your projects come alive with Saviom Enterprise Resource Management’s Gantt scheduler!

The Art of Managing Resources Across Multiple Projects

How to Reduce Absenteeism in the Workplace

Why is the Overallocation of Resources bad for you?
previous The Basics of A Project Charter Template
next Countering resource management challenges in operations management

Get our latest resources straight to your inbox!

See how intuitive and effective our resource management solution is by booking in a free,
custom-configured trial.